100 years of history support our production of high quality parts for the custom porcelain packaging industry. Anfora has very low costs in the development of molds and production runs from minimum orders of only 5,000 pieces. With more than 900 people working in Pachuca, Mexico, our factory can reach significant volumes when required.

Thanks to its high temperature kilns, Anfora has developed fully vitrified, lead-free and food grade (FDA-safe) lines for the production of packaging for premium spirits, wines, gourmet oils, perfumery and in general for the entire sector of luxury packaging. We know that our strength is based on being flexible and on high-quality products, attributes that we fulfill in every order. 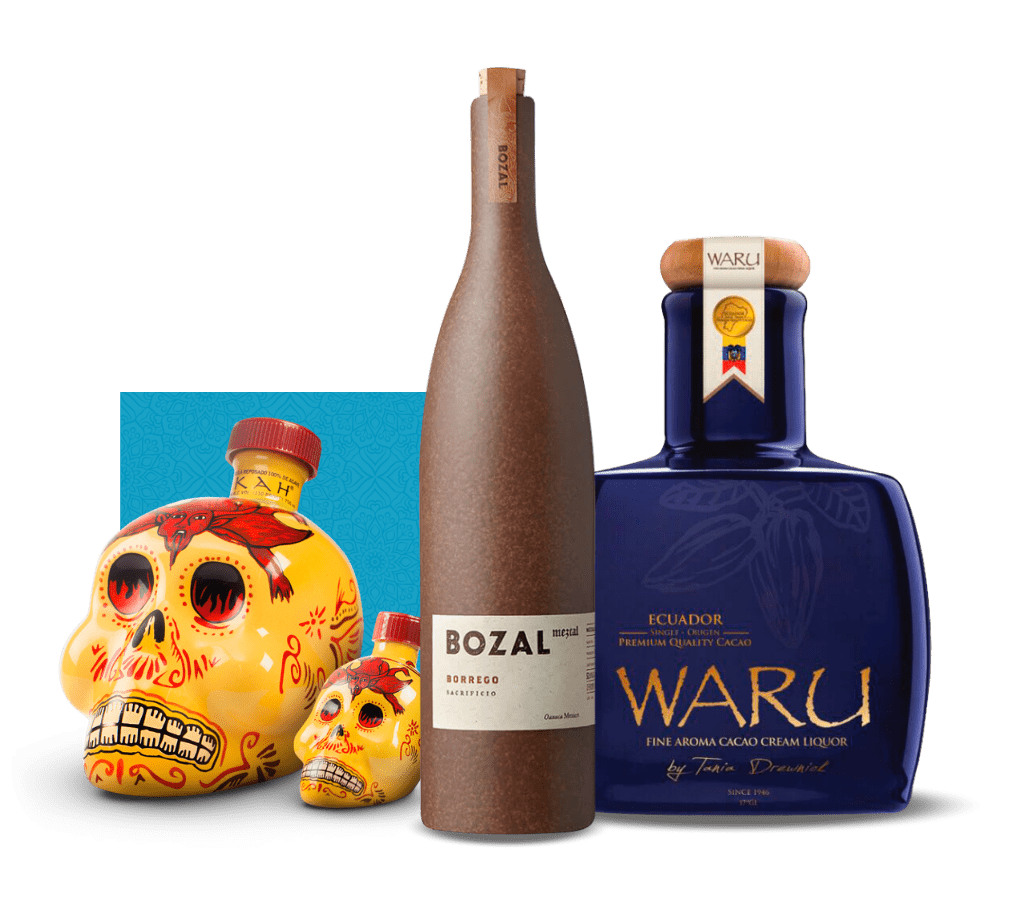 UNIQUE STORIES IN EACH PIECE

KAH Tequila, three unique skull-shaped designs from Jalisco, Mexico. Its hand-painted shapes and finishes with Day of the Dead motifs have generated enormous success in the markets of Russia, the Baltic States, Mexico, Australia and other countries around the world. KAH Tequila has trusted Anfora's quality and service for more than 8 years.

Mezcal Bozal is a development for 3 Badge Beverage Co., a company from Sonoma, California, who decided to move the production of their containers from Japan to Mexico after learning/FINDING OUT/DISCOVERING about Anfora's quality and guarantees. Bozal bottles feature five matte, high-texture glazes in custom scorched earth colors, all hand-applied by artisans within Anfora. They pack their exquisite mezcals with the best of the natural countryside from the states of Oaxaca, Guerrero and Durango for the most demanding markets in North America.

WARU is a 100% Ecuadorian family business that created a great liquor: Crema de Cacao de Fino Aroma. He packs his/THEY PACK THEIR exquisite drink in cleanly shaped bottles of vitrified Anfora porcelain. The classic beauty of its presentation and the taste of the liquor represents in an exceptional way the organic nature of Ecuadorian cocoa. They export to various countries in the world.

We can make custom designs from a minimum of 5,000 bottles (Minimum Order Quantity). This lowers the barrier to entry against the traditional glass industry, which starts at 80,000 pieces.

Our porcelain pieces are fired in high temperature, so they will never leak liquids or absorb moisture, bacterias or odors. We use completely lead-free glazes, which certifies us as food grade (food safe).

We make hundreds of custom molds, with development costs between 5 and 10 times less than the original glass bottle mold. Starting at 1,200 usd we can design a piece under a custom design.